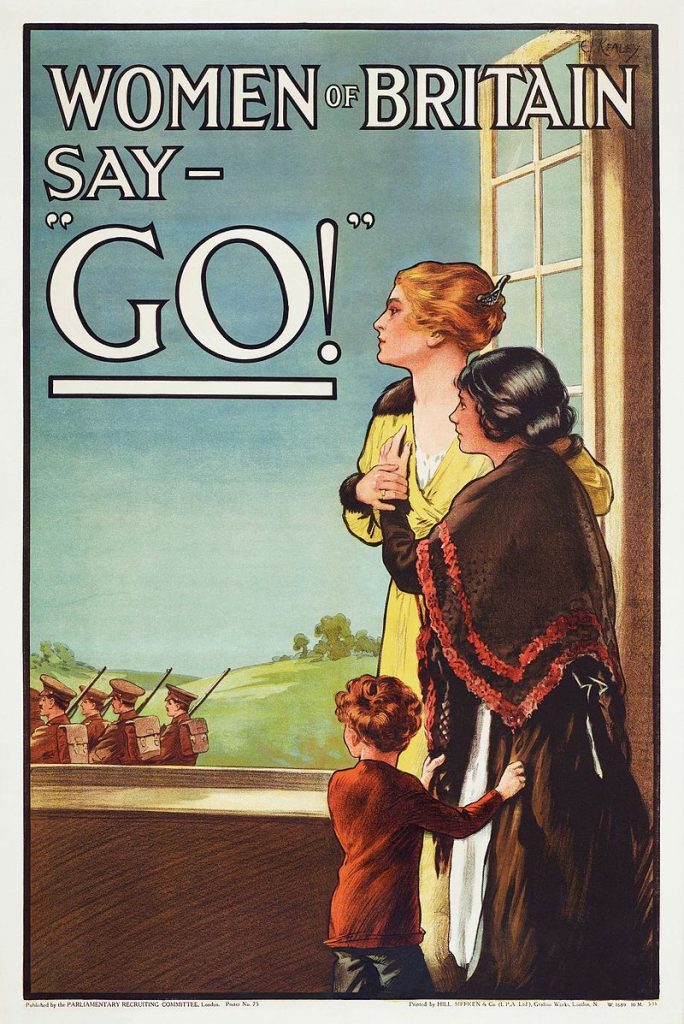 The year is 1919 and the war widow Mildred Miller prepares her small son for Sunday services where she will light a candle under a list of the names and ranks of fallen soldiers, one of which is Lance Corporal Alfred Miller, Mildred’s deceased husband. The once-decimated male population of Mildred’s neighborhood in Manchester is beginning to replenish—albeit, with boys who have just recently come of age—and there have been a few eligible young bachelors in the congregation who have expressed an interest in the 24-year-old mother. Because it has not been two years since she was told by the War Department that she had lost her childhood sweetheart to the European conflagration, she will not yet entertain courtship.

After the service ends, Mildred will walk to the park with the other black and grey-clad war widows where she will watch young Charlie and the other fatherless boys play. She holds her five-year-old son’s hat, vest, and tie while he kicks around a football that one of the other mothers borrowed from the church. From behind, she hears a familiar voice that she was sure had spoken its last words somewhere near the Franco-Belgian border months and months ago.

“Is that one Charlie, then? Gotten big, ain’t he?”

When Mildred turns, she sees a man in the brown coarse cloth of a British infantryman. He is leaning on crutches, with his left pant leg pinned to itself. He has grown a mustache and lost at least a stone, not counting the missing limb, but she recognizes her husband, nonetheless. After the Second Battle of the Marne, Mildred had received the notification of the man’s death. He had died heroically for King and Country, it said, and just like that, she was a widow—one of dozens in her village. Over the course of a year, she let him go, and there also went her love. Seeing him now, she knew it wouldn’t return, but she was Alfred’s wife nonetheless.

“Where have you been, Alfie?”

“Mostly France for a while.”

“The war’s been over for almost a year. You didn’t write. They told us you were dead.”

“Right, about that, I knew you and your mom was thinking I was dead and I thought it was a good way for you to think. But then I also got to considering the little one not having no father, you know?”

“We’ve had no money. I’ve been in mourning, How could you forget us?!” There were tears flowing down the face of the woman who up until a few minutes ago had been the Widow Miller.

“I didn’t mean tot,” Lance Corporal Alfie started, but then he froze. He wanted to tell Millie about the yellow gas and the green sludge. And about the headless and limbless corpses lining the walls of the pits that he lived in. How after the first month, he never thought about his family because they no longer existed. He wanted to tell this pretty woman who was apparently his wife about fishing in the sludge for ammo pouches or functioning rifles. What it was like to grab the face of a gas mask and realize that the man who died in it was still wearing it—only you couldn’t know that because his body was buried in earth that was wet with blood and piss and water. He had only one family, and it was called the 3rd Manchester Pals, and most of his brothers died in 1916 in the Battle of the Somme—long after he had buried the last memory of his wife and son and long before he had come home. He needed to tell her something, but she would never understand that he had died during four separate battles because she was looking at his face, which was thin but still full of blood and thought.“I didn’t mean to forget you and the boy,” he said again. “I mean, I remembered you, but not how you probably would have fancied. France took away my right to be a husband and a dad and left me with nothing but the flesh of a man’s body and a few medals tied to ribbons. I brung them for Charlie. Maybe someday you can use them to tell him why he doesn’t have a daddy.”

“But you’re his father and you’re alive,” Millie Miller said quietly. “He needs you.”

“Do you still love me?” Alfie asked his wife.

“Yeah, you’re right. Love the young man you remember. Better the boy think his dad is dead than a broken cripple. You find yourself a nice young man in the village who didn’t serve. Maybe a veteran’s son and you can fix this whole mess. I’ll find a way to earn some money and get it to you until you do. Then I’ll go away.”

“Where they went, Millie. Where my brothers went.”