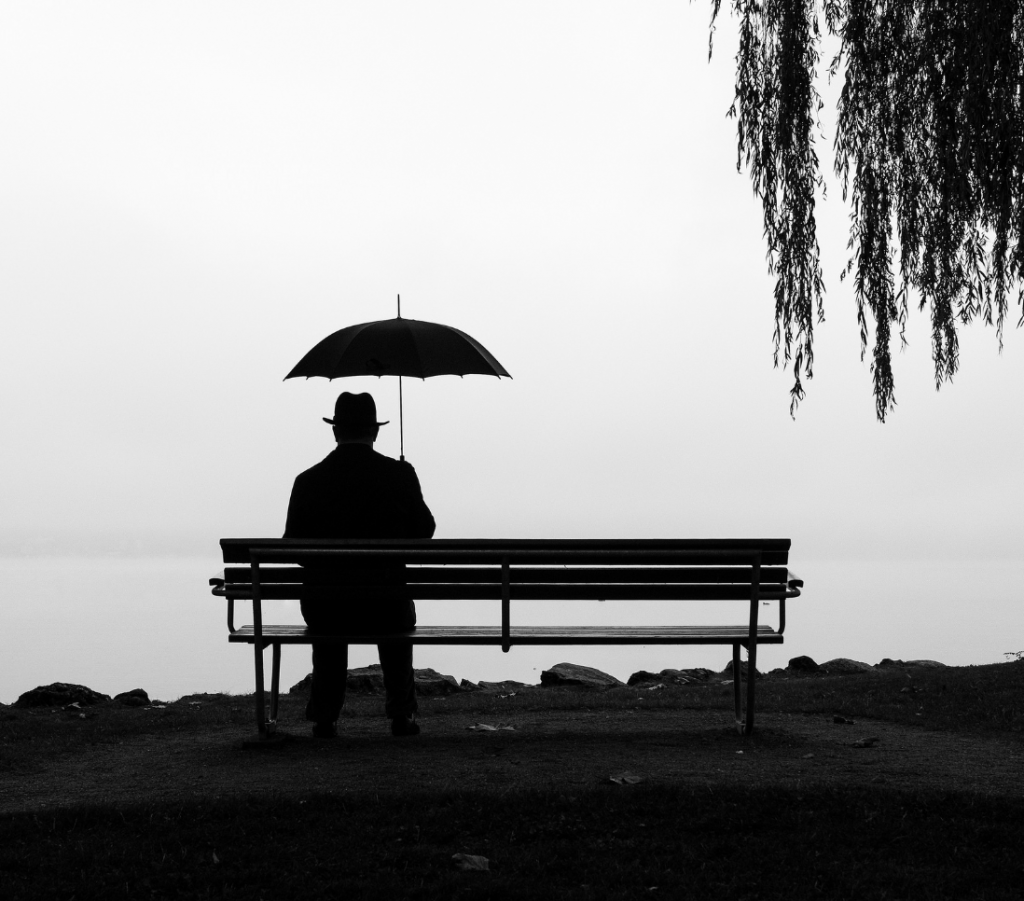 Every mornin’, I get up, I shave, get dressed, and make my way down to the train. I try to time it as closely as I can so that I’m not wastin’ no time on the platform, but the train gets there late sometime. You see, the platform is where all the trouble is gonna happen if there’s gonna be some. That don’t mean there has to be. Most folks mind their own business. They don’t got not time for a man holdin’ an old umbrella. Sure, they got themselves busy lives. But I watch them. Not in a bad way, but just maybe payin’ attention a little more closely than other folks do.

So, you know, you ride in a railroad train long enough you get to know faces. Some people, they commute every day, but others just take the train when they got a problem with their car or somethin’. Still others, well, they go down to the train station just because they’s drawn to the folks standin’ around on the platform, and those is the ones you got to watch. Now, you look around this platform and tells me which ones is which. You can’t cause this is you’s first time here, right? Well, I can tell you that I don’t see no creepy types hangin’ about today, but that don’t mean that I’m right necessarily. That’s why you and me has got to be ever vigilant, son. Ever vigilant.

Couple years ago, I was settin’ in that exact same spot you is right now. Don’t move. I want you to get the feel for the story. Only I was lookin’ down that way listenin’ for the 714, but watchin’ all the folks who was waitin’. And there were these boys looked to be a little older ‘an you. Maybe 18. Maybe 20. But they got on some fancy leather jackets and wearin’ shiny shirts and slacks ‘stead of dungarees. Just two of ‘em. Pale, white kids, lookin’ like they come from Europe or somethin’.

They’s been drinkin’ so much, I can smell it from here, so I’m startin’ to think ‘bout what kind of trouble they might causes to the others. I wasn’t worried about me. I’s makin’ myself real small and I never look like I got much on me, so to them, I was just some old man carryin’ a umbrella. But there was this pretty young lady wearin’ a dress—wasn’t flashy—polyester and plain, like your mamma might pick out for your sister to wear to church on Sunday or to some school social. She has this flower suitcase with some of the material worn off. And since I was noticin’ all that, I knew these boys might be noticin’ too.

Well, sure enough, they’s start walkin’ towards her and I didn’t like the way that looked. So, instead of waitin’ for trouble, I say, “It’s gonna rain, gentlemen. You got yo’ umbrellas wit you?”

The one closest to me starts a-laughin’. “What? You got a weather app on phone or something? Or you think you are weather app?” They both laughed a good one at that.

“No,” I says, “It’s gonna rain now.” And sure ‘nough, the sky cracks open and water starts comin’ down. We wasn’t gettin’ wet cause of the roof over us, course, but I held out my umbrella toward them, hook first. “You want to use my umbrella ’til the train comes?” I ask ’em.

“No, fuck off, old man. Maybe you have something else for us?”

So’s, the one who’s not talkin’ too much tries to try to move ’round my back. Guess they done this before and wanted to pen me in, but I wasn’t havin’ any of that. I dropped the hook of my umbrella to the one in front of me’s ankle, pulled hard, and brung him down backward, then I jammed the point into the other one’s bread basket. ‘Bout this time, the train gets there, so I just needed to keep them busy until everyone boarded and it started on its way. I saw that the first one I dropped had a gun in his belt, but he didn’t go for it—maybe he forget or too many witnesses or somethin’; I don’t know—so I just dropped the elbow of the umbrella on his face a few times and that put him to sleep for a little bit. The other just had the wind knocked out of him, but he had a knife.

You know why I don’t carry a knife, boy? It ain’t ’cause I can’t use one. It’s ’cause I have to get up so close I have to smell you if I did. Well, I don’t like smellin’ fear up that close ’cause it might just be contagious, but this one stunk of somein’ else, too. It ain’t that he didn’t know how to use the knife. He jus’ was drunk and hurt and scared. Ever-time he tried to take a swipe at me, I steps out of his damn way and hit him ‘cross the eyes with the tip of my ol’ umbrella. That won’t do no permanent damage, but it’s frustratin’ to the one who’s gettin’ hit. Well, he start gettin’ mad and gets more aggressive with that knife blade, so instead of swipin’, I poked. Took that eye right out of his head. Well, that stopped him. Might have blinded him permanent. Don’t know, but I left the eye there.

The train starts movin’ away by that time, but I was able to hook a door handle with my umbrella and pull myself along. Some of the kind passengers saw what I’d done and pulled me inside.

That’s how most people is, boy. They look out for the lookers out.