Your mother says you used to be such a handsome young man, and your father tells you that you look like a darn fool. The pastor at Sunday church thinks going to hell, and you think he might be right. You know that the good kids all listen to Gospel, but there’s something about that loud, brash beat that makes your whole body start a-shaking and a-rattling.

You started wearing dungarees at age 13 and you slick your hair back with pomade and a comb. When it’s not too hot out, you throw on a leather jacket and you squint like James Dean. Your town might be too square for Rock and Roll, but you have to stay until you’ve poured enough ice cream sodas to ride out and never look back.

In your bedroom, you toss a ball against the wall while you play your vinyl LPs on a hand-me-down suitcase turntable that your sister left you when she got married to the man from the hardware store. But when you’re out flipping pennies against the wall with the boys, you take the tunes with you in a battery-powered Airline transistor radio built by the Raytheon Company. With a battery life of up to three hours, Airline outlasts all other portable transistor radios on the market. And the Airline’s three-foot antenna allows you to pick up stations from up to twenty miles away. You could buy a cheap Japanese radio, but those are the cowards who bombed Pearl Harbor.

Airline Transistor Radios: the choice of Rock and Roll hepcats in all 48 states. 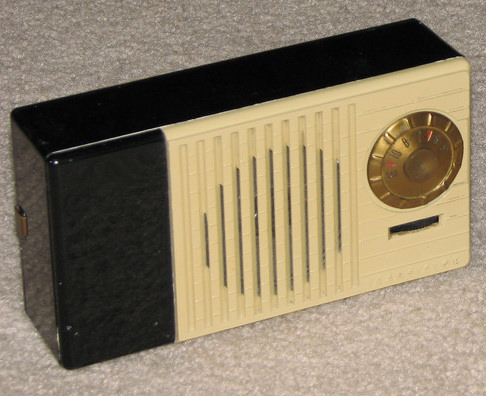 Sponsored content by the Raytheon Company of  Waltham, MA